You can't punish the… oh, right. Actually, you can.

@TheDemocrats1 are trying to discredit Rand Paul by tweeting a picture of him next to what appears to be an out-of-context quote: «You can’t punish rich people.» 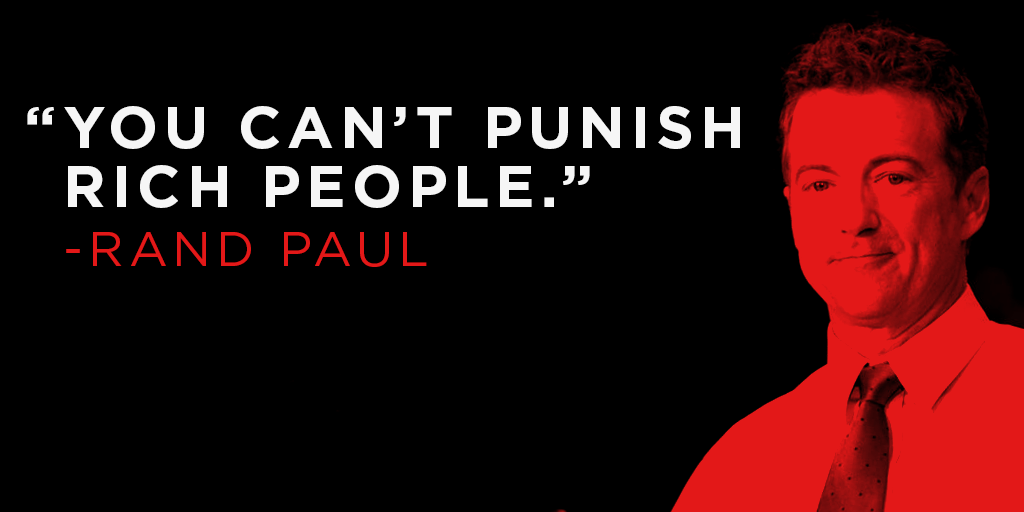 The troubling aspects to this are almost too many to count. But I’ll give it a try.

First, it looks like the Democratic Party now openly considers having wealth a crime. Otherwise, «punishment» wouldn’t be warranted, and defending the rich from being punished wouldn’t itself be any kind of indictment of character.

Second, the way it’s presented makes it appear as though he is making a moral statement, like «you shouldn’t…» or «please don’t punish rich people.» His point was clearly more practical than that. He said it’s a bad idea to try to punish rich people, and that it doesn’t work. His example was adding a tax to yachts, which sent shipbuilding offshore and cost workers in the United States jobs. Even the few sentences he got in The Hill’s recap make that clear.

It’s hard to argue against that point, too. Regardless of your belief that wealth will «trickle-down» from the top to everyone else, I don’t think anyone but a fool would claim that misfortune above doesn’t affect those below. Shit rolls downhill, and it always has.

What’s most troubling about this is how well it highlights that both democrats and republicans completely fail to comprehend how wealth, power, and politics work.

You can’t punish the rich, because the only way to do so is to give increasingly greater authority and power to the government. The best-case scenario is that that replaces the rich with a new breed of the rich and connected. What’s more likely is that giving that power to government entities more deeply entrenches the wealthy who are already colluding with politicians.

Rand Paul might actually understand that. What scares me is that the Democrats (and @TheDemocrats) certainly do.